It will be No. 1 Kentucky vs. No. 5 North Carolina on Saturday at Rupp Arena.

In addition to climbing atop the AP Top 25 men’s college basketball poll earlier today, Kentucky is also the new No. 1 in the ESPN/USA Today Coaches poll with 22 of 31 first place votes.

The ESPN/USA TODAY Board of Coaches is made up of 31 head coaches at Division I institutions.

Kentucky is your new AP No. 1.

Kentucky is the new Associated Press No. 1 men’s college basketball team, receiving 46 of 65 first-place votes. UK returns to the top spot in the AP Top 25 for the first time since 2009-’10. The Wildcats (6-0) replaced North Carolina, which had been No. 1 since the preseason AP poll.

That means it’ll be No. 5 North Carolina at No. 1 Kentucky on Saturday at Noon at Rupp Arena in one of the most highly-anticipated games in recent memory. 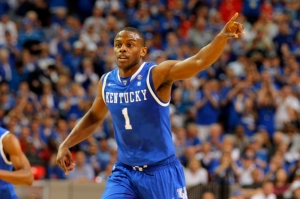 Kentucky now ranked #1 in the land.

CBSSports.com has released their latest Top 25 and Kentucky is sitting on top of the men’s college basketball world in the CBS poll.

Kentucky was ranked #2 in the latest Associated Press and Coaches Polls but is expected to also be ranked #1 in both of this week’s polls due to be released on Monday.

Previous top-ranked North Carolina lost to UNLV this weekend, enabling Kentucky to most likely move up one spot and become the latest #1 team in the land.

Kentucky faces St. Johns at home on Thursday evening, followed by the much-anticipated match-up next Saturday at Rupp Arena between UK and North Carolina.